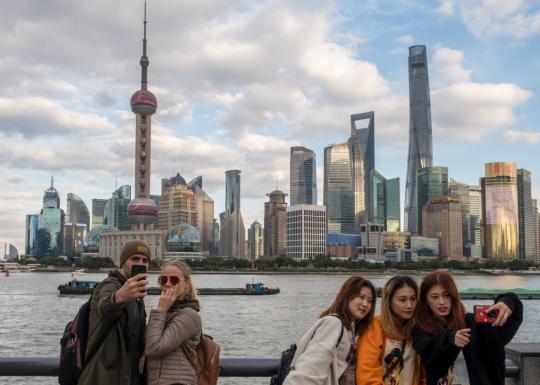 Tourists pose for photographs on the Bund, a major scenic spot on the Huangpu River, in Shanghai. [Photo by Wang Gang/For China Daily]

Shanghai is deemed as an international cultural metropolis with a large number of cultural facilities and events in the eyes of foreigners, according to a new survey published on Nov 27.

Conducted by the China Institute for Urban Governance of Shanghai Jiao Tong University, the survey polled 436 international students and travelers at Pudong International Airport as well as foreign residents in the city.

More than 97 percent of the participants view Shanghai as an international cultural metropolis. In their words, the city is "modern", "welcoming", and "diverse".

As most of the foreigners polled had learned about Shanghai before their visit, 95 percent of them said the city lives up to or exceeds their expectations, while 61.2 percent think that Shanghai is much better than what they imagined it to be.

According to the survey respondents, their perception of the city has been influenced by the many cultural infrastructures in the city, such as libraries, theaters and museums. Shanghai had 131 museums as of the end of 2018, meaning that there is a museum for every 185,000 residents, the survey revealed.

The large number of small coffee shops, teahouses and bars was also highly rated by foreigners, and the Oriental Pearl Television Tower and the historical architectures on the Bund were seen as cultural landmarks of the city.

In terms of cultural activities and events, more than 50 percent of the participants said they are satisfied with the city's light shows, concerts, indoor exhibitions and other performances.

Most popular in 24h